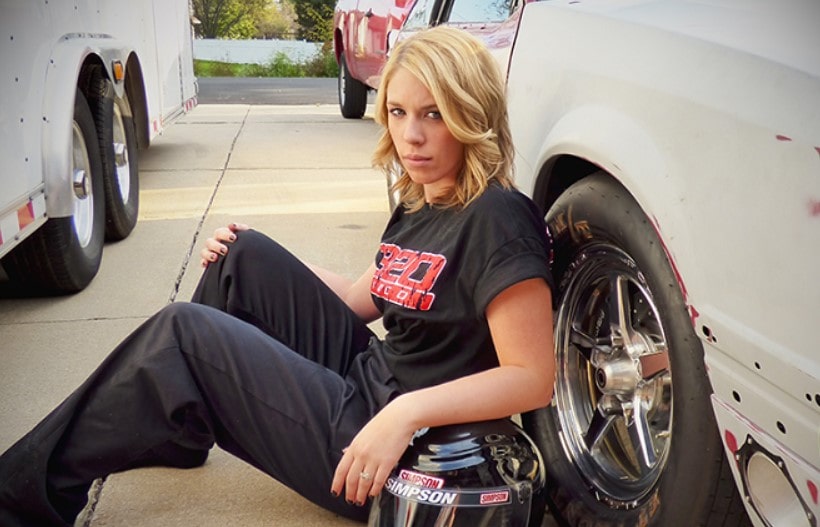 Street Outlaws is a famous reality television series where skilled car racers show their talent in winning competitions and assembling car parts. Jackie Braasch is one who rose to fame after being romantically involved with Big Chief.

Many people have been talking about the beautiful woman who is always intimate with the television star, and they want to know if she is a perfect match for the car racer. Moreover, people on social media wanted to know more about her life details.

Social media platforms also spread rumors about her involvement in some controversies, making her name more known. What is the truth about Jackie Braasch’s life, and does she have something to do with the issues being thrown against her?

Jackies has been a well-known celebrity girlfriend of Big Chief. Other than that, she has already made a name for herself in the racing industry. Many interviews were done with Jackie, and she has told sources that racing runs in their family’s bloodline.

According to Braasch, her father worked as a garage worker and was strongly inclined toward racing. It’s her father who piqued her interest in falling in love with cars. Jackie’s father was very supportive of her kids’ dream to be involved in the racing industry.

Ever since she and her siblings were young, their father would let them go to the racing field and watch him race. Her father also let her help fix car parts. People were intrigued about how young Jackie started as a race car driver since she still looks young today.

Braasch shared with the public that when she and her sister were still studying in an elementary school, they developed a passion for racing. In 2008, Jackie did not want to miss the opportunity of having an excellent academic background, so she continued studying at a local Joliet high school.

After completing high school, the race care driver focused on her college studies and studied hard to get a degree. She did not disappoint her family despite being focused on car racing. Jackie also got a BA degree in Child Development from Joliet Junior College.

How old is Jackie Braasch?

Social media users noticed that Jackie is a stunning woman in the racing industry. They questioned her age since she looks young but has a promising talent for cars and racing.

Jackie Braasch was born in Joliet, Illinois, the United States, on July 4, 1990, and is now 31. What people said is true, she is young, and this is not new to her avid fans as they know that the female race car driver had a passion for cars at a young age.

When people ask her why she has so much knowledge about cars, fans always answer that it is in her blood. Her family influenced Jackie to be unique and develop a love for motorsports.

At the age of 17, Jackie started to develop her love for racing leading to her getting a dragster at such a young age. Many race car drivers nowadays only focus on what they want when winning championships and earning money.

However, it is different for Jackie as she does not entirely focus on cars and winning tournaments. She enjoys meeting new people and developing conversations that turn into great friendships.

Braasch participated in various championships like the Super Pro Championship, Rocket Brand Race Fuel Bracket Series, and her most famous tournament, the Car Chix Ladies Only Drag Race. At first, she had doubts since 400 women tried to hinder her career from being built.

Jackie managed to be included in the top 12, and the Car Chix management saw her potential and hired her to be a part of them. Her career impacted many women as she inspired them to be different because there is nothing wrong with it.

The most iconic moment for the famous female race car driver is that she appeared as Miss May in the Car Chix Calendar in 2015. During that time, she won another reward, a Spitzer dragster.

Many people praised Jackie for having a backup career behind car racing as she is also working as a pre-school teacher. The race car driver knew that teaching young kids is also helpful to the community, and she could inspire them to be the best versions of themselves.

Jackie Braasch Braasch is Famous for being Big Chief Girlfriend

Chief and Jackie have been together for a few years. They support each other whenever they participate in competitions and championships. The couple got each other’s backs when times got rough and always made things work to get through the day.

According to sources, Jackie met her boyfriend when she was invited to be august in Street Outlaws. Since they are both inclined toward the same industry, they could not avoid talking to each other and developing feelings.

Many Street Outlaws fans were dismayed after learning that Big Chief left his wife for Jackie Braasch. In 2017, Big Chief’s wife, Alicia Shearer, decided to end their marriage through a divorce.

Their separation gained attention from regular viewers since the husband and wife are sweet to each other. Furthermore, people claimed that Braasch was the reason behind Big Chief and his wife’s divorce.

However, there are no confirmations about the allegations against Jackie. Some avid fans of Jackie reminded the race car driver to ignore the bashers since they do not know the truth about her relationship with Big Chief.

With the success Jackie is gaining from being the girlfriend of Big Chief, her social media accounts reached many people. Her Instagram account has 85,400 followers, and it keeps growing daily.

Jackie often posts pictures of herself on her Instagram account, and people compliment her for giving them lifestyle updates. In an Instagram post, Jackie posted a photo of Big Chief and her where she put a caption apologizing to people for not uploading a video.

Many people admired Jackie for being brave and posting pictures of her and Big Chief during Thanksgiving. In an Instagram post, Jackie greeted everyone with a Happy Thanksgiving while being hugged by Big Chief.